Tis Babos: The Dance of the One Who Gives Life 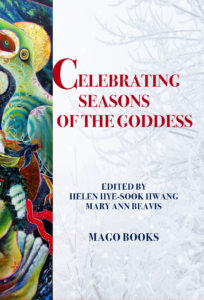 The one who gives life, the one who gives birth: this was the original image of the Creator. Not God but the Goddess, both mother and midwife to the world. This ancient belief laid the foundation for European culture. Thousands of years later, deep reverence for the woman who gives life - the midwife - is expressed in Thracian dance rituals which survive from the distant past. The midwife is publicly honoured on Midwives’ Day, January 8th, in a women-only celebration known as Babinden in Bulgaria, Tis Babos in Greece, described here as it takes place in the village of Kitros.

Both in  Celebrating Seasons of the Goddess, edited by H. Hye-Sook Hwang and M. A. Beavis. Mago Books, 2017. Available from www.magobooks.com